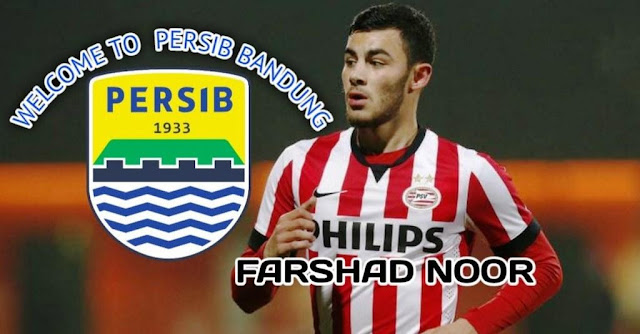 As reported by the official club page, this player is scheduled to join Bandung soon. He will be tested for his potential in the 2021 Menpora Cup pre-season match. The

player who graduated from PSV Eindhoven is on a free transfer after he last joined club Nea Salamis in the Cyprus Special League.

According to the Transfermarkt page, Farshad Noor is a player who plays as a central midfielder. He is 26 years old.

Not only at PSV, he also played for other Dutch clubs, Roda JC and SC Cambuur. Starting in 2018 he joined Nea Salamis in Cyprus. He was released from the club in July 2020.

In that page, he appeared 42 times in the Cyprus League and scored 3gol. And according to Wikipedia, he has strengthened the Afghan national team 16 times and scored one goal.

Persib needs a new midfielder as they have lost Omid Nazari and Kim Jeffrey Kurniawan.

Persib Bandung has increased the recruitment of its players in the 2021 season by bringing in a foreign player who has the name, Farshad Noor.

Farshad Noor is an Afghan passport player who was born in the Netherlands and plays as a center forward.

Noor was found to have had his knowledge of football in the Netherlands when he joined the youth club PSV Eindhoven.

The most recent club defended by Noor is Nea Salamis, a participating club in the Cyprus Special League.

The data on the Transfermarkt website prove that Noor is the leading player at Nea Salamis.

Farshad Noor played around 16 times in all 22 matches in the Cyprus Special League in the 2019-2020 season.

Noor scored 1 goal in all of his 16 performances.

In the 2018-2019 season, Farshad Noor’s performance record was better by playing 20 times out of a total of 22 matches. 2 goals successfully made.

Before his departure in Cyprus, Noor defended a club from Sweden which has the name AFC Eskilstuna.

Farshad Noor is also listed as having defended clubs from the Netherlands such as Roda JC and SC Cambuur.

Farshad Noor will most likely fill in the status that Omid Nazari left in the middle position of Persib Bandung. ***