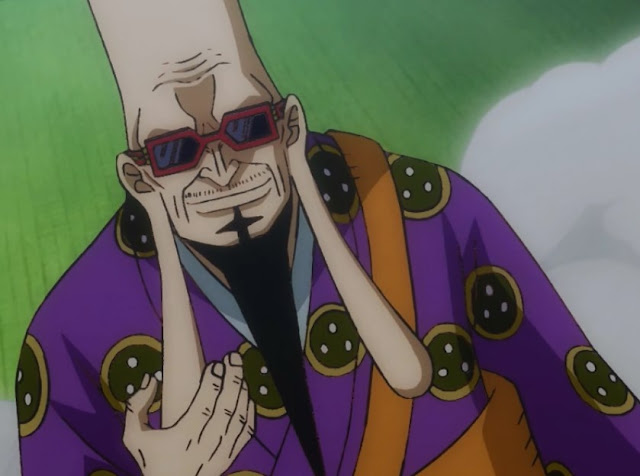 Fukurokuju One Piece – Fukurokuju is the leader of the Oniwabanshu Orochi group. After Kaido’s coup against Orochi, Fukurokuju turned to support the Yonko group.

But between the riots in chapter 990, Fukurokuju one piece did something strange.

Well, we saw Fukurokuju observing the fight briefly then he left.

This action is mysterious. Even Hotei, the leader of the Miwarigumi samurai, seemed surprised by Fukurokuju’s actions.

What exactly is this ninja trying to do?

2. Does he secretly want to fight against Kaido’s group?

But now the situation is in chaos. Especially since Kozuki’s samurai had already decided to fight.

If Fukurokuju felt like he was not going to win, now he actually has a chance.

Kaido has already killed Orochi, the boss of Fukurokuju. Does this ninja still have a speck of honor, and will he attack unexpectedly like a ninja should?

Well, we know from chapter 990 that Tobi Roppo was asked by King to stop the enemies from climbing onto the roof. In addition, Tobi Roppo will also not be given the opportunity to challenge the All-Star again even if they even catch Yamato.

Maybe Fukurokuju took the initiative to hunt down and finish off the higher-ups of the Kozuki clan after he saw Momo run away.

Shinobi and Fukurokuju are both ninja. They also have past problems. So this is indeed a suitable fight.

In the original legend, Yamata-no-Orochi died only after Susanoo cut off eight of his head.

Fukurokuju may really still be loyal to Orochi, and he intends to secure Orochi so that Orochi can rise again with the rest of his head.

If this is true, what will Orochi do? The possibility that he would order his samurai to fight Kaido and Kozuki’s samurai at the same time, made the war even more chaotic.

So, that’s my theory about Fukurokuju’s mysterious actions in One Piece 990.

What do you think? Convey in the comments column!